Up at Fred's - Allons-y! - an original-cast DVD recording of the entire show 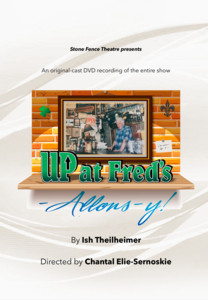 Up at Fred's - Allons-y!  was Stone Fence Theatre's most successful show ever, playing to an unbroken string of 17 full houses. The show tells the story of Fred Meilleur's famous hotel in Chapeau, Quebec. The DVD features a full performance shot at the Rankin Culture and Community Centre in October, 2019, featuring the full cast and all your favourite songs and scene.

The price is $25, including tax and shipping, and everyone who donates $100 or more gets a DVD free. 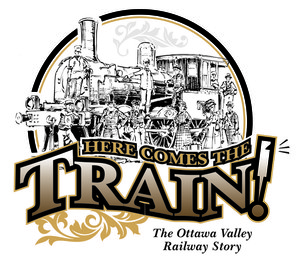 Stone Fence Theatre has produced a professional recording of the songs from the smash hit Here Comes the Train! The Ottawa Valley Railway Story.

The CD is available at shows throughout the season, as well as at the Railway Museum of Eastern Ontario. Or order a copy now.

The Wilno Chicken and other songs for my community (CD) 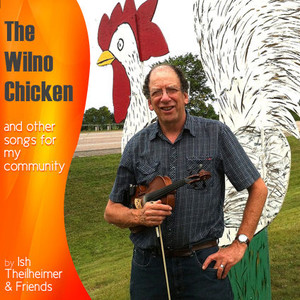 "The Wilno Chicken, and Other Songs for my Community, by Ish Theilheimer and Friends" includes 13 songs written over the past 15 years, mostly for Stone Fence Theatre.

Proceeds of the sale of the CD go to support the St. Frances Valley Healthcare Foundation, which supports the hospital, hospice and nursing home in Barry’s Bay.

The CD is named for Theilheimer's most-requested song, which tells the story of the theft, in 2001, of the plywood chicken that advertises the annual chicken supper at St. Mary's Church in Wilno. Many of the songs in this collection are humourous, but many are also strongly emotional.

About half the songs are in folk or traditional style. The others utilize a variety of styles including country, pop, rap, soul, and gospel.

The Wilno Chicken
Going to Barry's Bay for Midnight Mass
Buying Land
In the Summer Kitchen
The Magic Song
Love Your Neighbour
What's Crazy 'Bout That?
Jack and Aggie's Cows
In the Valley Twilight
What the Killaloe Hippies Do (Turn On, Tune In)
The Rights of Man
In My Community
Don't Get My Valley Up!